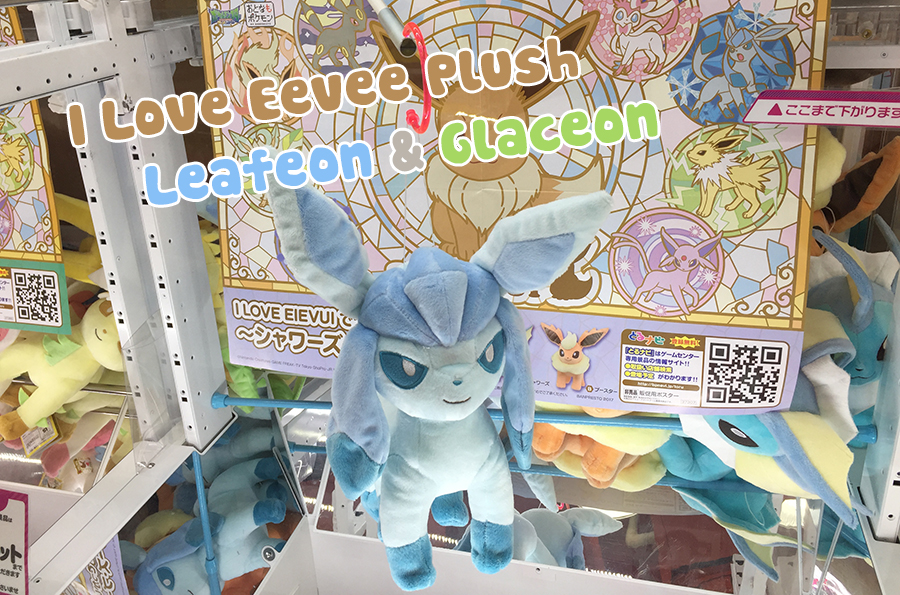 And we’re back, this time with new UFO Catcher Adventures! Plush number one: a new Pikachu plush, called “Ash’s Pikachu” because he is wearing Ash’s Alolan region hat. Because we can never have too many Pikachu plush! These plush are the usual “big” size of 25 cm or a little under 10 inches. They’re pretty cute, but they’re also weirdly flat? But I’m also semi picky about plush, so it bothers me when plush aren’t proportionately round. The pose is pretty cute, though, and slightly reminiscent of Gangnam Style (although they were probably going more for looking cool but once seen cannot unsee).

Edit: I have been informed this is Pikachu’s Z-Move pose. In my defense, I got sidetracked by Festival Plaza and that’s all I do now. The other two plush released today are part of the I Love Eevee series: Leafeon and Glaceon!

Like the other releases in the same series, both Leafeon and Glaceon are incredibly soft. They both have the weird wiring in the ears to help make the ears stand up. They seem a little smaller than the previously released Eeveelutions, but this might be due to the fact their tails aren’t quite as big. And as usual, Leafeon’s various leafy extra bits are felt pieces that are either sewn in to the plush body or attached with glue (the leaf on his forehead).

Overall, these two buddies fit in well with their Eeveelution brethren, so lovers of the series (and Eevee and Leafeon and Glaceon) should rejoice! Bonus picture: my haul for today! This includes plush I won for other people as well as some figures for me, Nyanko Sensei for my girlfriend, and I couldn’t resist a chance to win some Umaibo. I picked up some great flavors – tonkatsu sauce, salami, and teriyaki burger, along with the Umaibo staples (salad and corn pottage).

Today’s UFO catcher adventures went pretty well, which is nice since I haven’t had a day go pretty well in a while! The majority of machines I played at where medium to easy difficulty, this in turn made it more fun to go around and win stuff. I managed to attract a small crowd in Akihabara which is always amusing.

Eeveelutions come out on Saturday and Pokemon news comes out tomorrow. Stay tuned for more excitement!