It’s been non-stop action since I arrived in Japan Thursday and I’m doing my best to get caught up.

First up, an important announcement!

While I’m in Japan, I’ll be offering my pick-up services! I will be picking up everything included in this post, as well as Banpresto prize plush, and a bunch of other stuff.

Keep an eye on this page for the most up to date information on items and prices.

See something you like? Get in touch with me through one of the following ways! This brand new Formal Attire set features a cute hat and little shoes along with shirt, pants, and bow-tie.

The set of Formal clothing will cost 3,780 yen after tax. Next up, the College Logo series from last year returns with a second part! This promo will go on sale at all Pokemon Centers and Stores in Japan starting November 25th (Saturday).

This release will feature a bunch of similar items from last year’s release but with updated logos and Rowlet! A bunch of TCG merch was announced for December as well!

All of the new TCG items mentioned here will go on sale at all Pokemon Centers and Stores in Japan starting December 8th (Friday).

As usual lately, each pack will have 64 sleeves and will cost 777 yen after tax.

There will be 7 designs in total for this release: Pyukumuku, Lillie, Espeon & Umbreon, Volkner & Luxray, Cynthia & Lucario, Lucario, and Ultra Sun & Moon.

Along with the card sleeves, there will also be two deck cases.

The Ultra Sun & Moon design will cost 390 yen after tax. A Cynthia rubber play-mat will go on sale on the same day for 2,700 yen after tax. Last but not least, a special Premium Trainer’s Set will also go on sale December 8th for 5,400 yen after tax.

The set will include:

That wraps up Friday’s announcements!

Tomorrow brings us the second half of the most recent Its’Demo release. I will be there at opening so if you’re interested to see what’s coming out, follow my Twitter account (@zombiemiki) and be awake at 10 am Japan time!

Liked anything mentioned in this post? I can get it for you! Check out my pick-ups page here 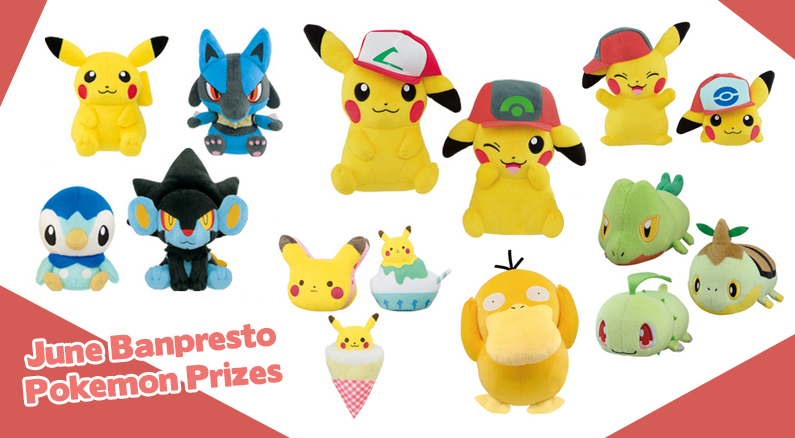 This blog post will cover all the Banpresto prize plush announced for June.

The summer Pokemon movie is just around the corner, and the movie related merchandise is starting to pick up steam. We should continue to see movie merch until the end of summer.

All of the Pikachu plush measure roughly 24 cm tall.

3 bath towels will also start appearing in game centers from June 27th (Tuesday).
Each towel measures roughly 60 cm by 120 cm and the three designs are Ash’s Pikachu, Lots of Pikachu, and Ho-oh.

June will also give us two releases from the Pokemon Sun & Moon extra large plush line-up.

The Pokemon Tea Party series continues into June with two sets of plush.

Last and certainly not least, we have some new Kororin Friends and Korotto Manmaru plush to look forward to!

From the Kororin Friends series, we have a large Bulbasaur plush (measuring roughly 26 cm long) that will start appearing in game centers from June 13th (Tuesday).
The smaller sized Treecko, Torchic, and Turtwig plush will also come out June 13th (Tuesday), with each plush measuring about 12 cm.

That wraps up the new plush for June!

I have a feeling we’ll be seeing at least one new Lycanroc plush for July or August.