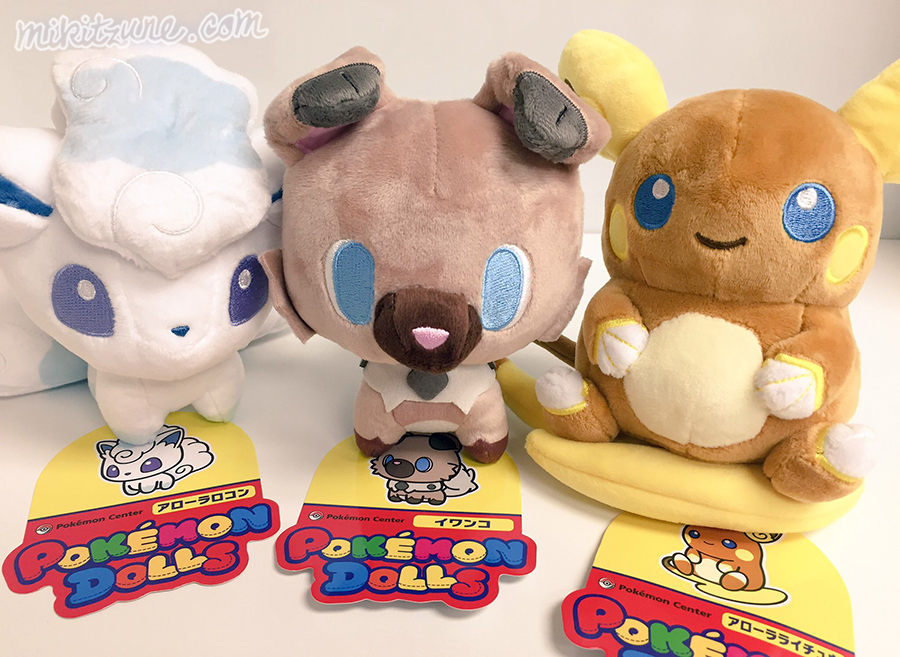 I got a package recently from the always amazing Japan Stuffs, and I wanted to share some of the items I bought over the past few months.

I was excited for everything, honestly, but let’s start with the newest Pokedolls. As advance warning, the majority of this post will be Alola Vulpix and Alola Raichu. Even before Gen 7, I was a Vulpix collector, and as weird as it still is to me that the Alola version of Vulpix would be ice, all things considered, I still think he is a super cutie and have been doing my best to get whatever cute merchandise of his that comes out. (Same for Raichu!)

Like most four legged Pokedolls (notably the Eeveelution Pokedolls), he is top heavy, but can stand on his own thanks in part to the huge tail.

One thing of note is the lack of paw pads, I guess due to size – the paws are very tiny. Also, I noticed on a couple plush that one front leg is shorter than the other. In general this doesn’t affect whether the plush can stand or not, but if you’re into having perfect plush, I can see this being annoying. On the plus side, I noticed far less wonky/crooked noses compared to the original Pokemon Center and Sapporo Center plush.

This is actually the very first Alola Raichu plush I own! My problem with all previously released plush is he hasn’t been fat enough for me, but I knew the Pokedoll would be perfect and it is. I know some people were put off by the lack of nose, but I find it makes his face even more adorable. They even included little fingers and toes with yellow stitching on the paws. He stands easily on his own and is a perfect little bean.

Rockruff actually belongs to my girlfriend but she let me take photos! I don’t collect Rockruff, but I was close to getting one anyway because of how adorable his face turned out. Look at those puppy eyes and little snout! Even with his huge head, he stands fine on his own (although I can see how some plush might be a little top heavy). Also his little fluffy ruff is made of felt, so it could be softer. But he is still too cute for words!

Moving on to more Vulpix! This little guy is a Banpresto claw machine prize and came out in February. Look at his little foxie face: it’s perfect! Although less soft than the Pokedolls, I think I actually prefer this little guy. Also, unlike the Pokedolls, he has little paw pads, and his eyes are blue and green, which is closer to how Alola Vulpix looks in the game. His little tail is also rounder. My little guy stands up fine on his own, which is always a plus. Last but not least, the so cute I can’t handle it Vulpix and Alola Vulpix Pikachu poncho plush! I know some people are a little tired of Pikachu dressed as other Pokemon and would prefer more plush of the other Pokemon, but I love these plush, and the little ponchos are so soft!

I can’t say enough how soft these plush are. I just want to snuggle them!

Based on photos, I thought the normal Vulpix coloring was a little dark but in person, it’s actually a nice color in my opinion, and I still don’t know why poor Vulpix is less popular than Alola Vulpix. They’re both adorable! Another plus is they both can easily stand (sit?) on their own. And while I’m heaping praises on these plush, the tag art is beyond adorable.

Basically these plush are perfect! What neat Pokemon merchandise have you picked up recently?

Thanks for reading and until next time~