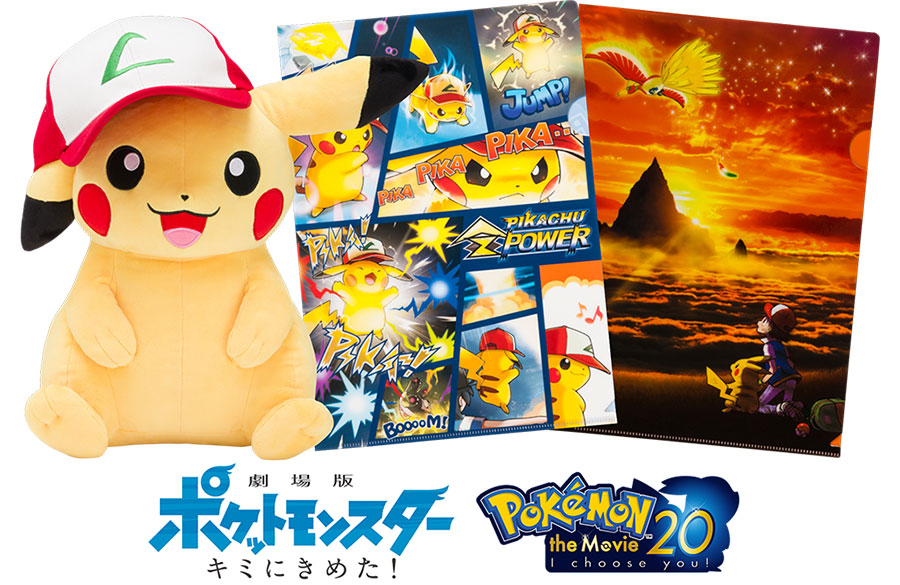 It’s that time of year where we’re getting closer to summer and the annual Pokemon summer movie. This year’s movie, called Pokemon The Movie: I Choose You, is the first in the Sun & Moon line of Pokemon movies and like everything in the world lately is a remake of an earlier film.

There will definitely be more stuff with a little more variety when the movie is released, with some movie theater exclusive stuff, but for now, here is a taste and a little bit of nostalgia if you’re into that. There are three parts to this promo: Pikachu plush and related items, Pikachu Z-Move items, and the legendary Ho-Oh scene illustrated items. Aside from a clearfile that will be available with the Pikachu Z-Move illustration and the Ho-Oh illustration, the two parts have different items. For example, there is a cup with the Ho-Oh art, but no cup for Pikachu. There is an eraser for Pikachu but not for Ho-Oh. Small stuff.

Of note is the Pikachu main plush, which is going to be bigger than the usual Pokemon Center plush based on the price.

The Movie promotion goods will go on sale at all Pokemon Centers and Stores in Japan on April 15th (Saturday).

(If you don’t live in Japan and would like some items from this promotion, check out Japan Stuffs!)

Starting April 8th and until supplies run out, the Pokemon Center will be giving away 1 canvas tote bag for every 10,000 yen spent at the on-line store. There are 3 designs in total (the same used for the promotional posters given out previously) and the canvas tote bag you get will be random. Based on previous campaigns, if you spend 30,000 (roughly $300 USD) you should be able to get 1 of each design.

And that concludes the announcements for Friday. Saturday brings us the Beach Party Time ichiban-kuji, new Pokedolls (Rockruff, Alola Vulpix, and Alola Raichu) and the Johto can badges, so stay tuned for photos when I get them!