Eeveelutions The Bloodening Part IV: From Fear Through the Eyes of Madness 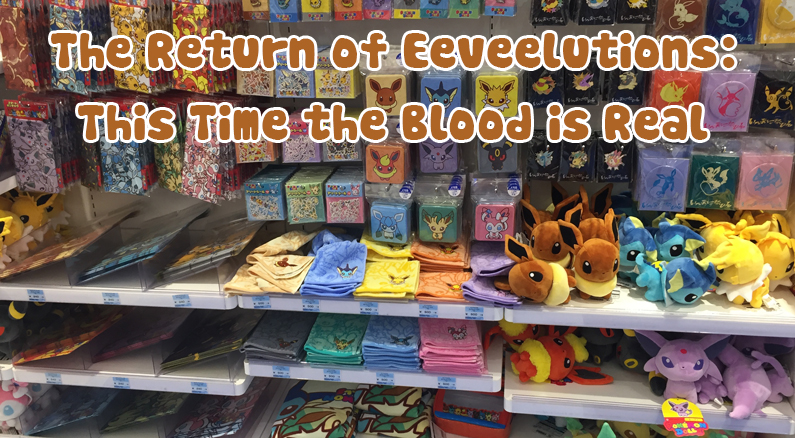 When I decided to visit Japan for a month long stay between April and May, I knew that there would be a bunch of big releases around Golden Week (a week long string of public holidays near the beginning of May), which was one of the reasons why I went in the first place. What I didn’t anticipate was the Pokemon Center would give us a rather big Eeveelution promotion, and on top of that, an entire line of new Pokedolls. But that’s exactly what happened (and a bunch of brand new mascot plush to boot!).

There were two main releases on May 13th, along with a new set of gacha figures and a bunch of side campaigns and extras. Next – Pokedoll Mascot Plush! This new series of plush is basically smaller mascot versions of the Pokedolls. Not only were the 9 Eeveelutions included in this release, but we also got Rowlet, Litten, and Popplio.

Eevee Collection also came out on May 13th. This promotion featured a wide variety of items, from Frixion highlighters and two types of pins to hoodies, t-shirts, hats, and ita bags. To make things more exciting, the Pokemon Center didn’t make anything blind packaged and instead let customers choose exactly which Eeveelution they wanted featured on whatever item they wanted by making 9 types of each item.

Some items of note:

Memo cases! These cases feature a different Pokedoll Eeveelution illustration on the outside and have note paper inside with a couple different paper designs. I love when the Pokemon Center sells new and super cute memo pads because I love writing notes for my friends (and myself) on cute paper. Ita Bags (Tote Bags)! Made of a vinyl type fabric, these bags are sturdy and probably bigger than you’re expecting. Each bag is a color matching their respective Eeveelution and features a clear cut out of that Eeveelutions head on the front.

Card Cases! These cases were in hot demand from day one, to the point where all Pokemon Centers and Stores limited them 1 per person. Even with the limit, they sold out everywhere within the first day, although were restocked a week later. It was only recently that the limit was lifted.

The Pokedoll pouch is pretty cute and has a little clear window so you can see inside! Big enough to fit a couple Pokedolls if you wanted to, or the usual assortment of drawing and art supplies.

Stickers! Each Eeveelution got it’s own little sticker pack featuring different sizes of the Pokedoll art, along with a couple stickers with all the Eeveelutions together. Each Eeveelution also got a hat, a hoodie, and a t-shirt. All three items featured the non-Pokedoll artwork and had a different color combination for each Eeveelution. Pictured here is Eevee, but the other Eeveelution designs were pretty similar. I was not expecting this gacha to sell out at all, considering how the first two Gacha sets were still in stores months later. On top of that, no one seemed excited to play at Tokyo Bay. It was literally just me sitting there and spinning the little machine. So when I showed up at Sky Tree Monday after release and couldn’t find it, and then was told at Mega Tokyo on Tuesday that it was sold out, it was a shock. By that point, when I returned to Tokyo Bay, it was sold out there as well…for a day. By the next day, it was restocked at all locations and was back to no danger of ever running out by the time I left.

The figures are super cute though, not gonna lie! I of course got an Umbreon, Eevee, and Flareon for myself.

As part of the extra campaigns, which included digital Eeveelutions for everyone’s Pokemon games, all Pokemon Centers and Stores were also giving out these cute paper headbands for all guests. Some places, like Tokyo Bay, only gave them out to customers who bought and paid for something. Other places, like Sky Tree, gave them out to anyone who walked in.

A couple Pokemon Centers also had dioramas featuring 1:1 size cut-outs of each Eeveelution. Customers were free to take pictures in and among the Eevees.

One of the campaigns I was looking forward to most were these special clear cards with five different illustrations featuring the Eeveelutions (I’m a sucker for clear cards). There was also a secret design that was different between the on-line center and brick and mortar centers. Unfortunately, for unknown reasons, these cards were delayed until the 27th. So how did the Pokemon Center ensure people would get the cards they would have gotten based on their Eeveelution purchases? They gave out little redemption cards, and hand wrote in the number of cards that were owed to you. Needless to say, between me and Japan Stuffs, we have a lot of cards.

The pamphlet on the left started getting distributed from Pokemon Centers and Stores from May 13th and advertises a huge spoiler for 1:1 size Eeveelution plush. This pamphlet is all we know about the plush at this point, with more information coming out on the official website June 2nd (so stay tuned!) In short, the plush will be available for pre-order exclusively through the Pokemon Center On-line Store from mid-June until the end of July. No release date is known yet. No other pictures are available.

The Pokemon Center On-line Store offered box sets for each Eeveelution. Each set included one of each Eevee Collection item for a specific Eeveelution, including 1 mascot plush and 1 Pokedoll, and was shipped in a Pokemon Center box featuring that Eeveelution. I helped three people get boxes (the three pictured here). Based on the items and the size, I figured the boxes would be medium sized at best, but I wasn’t expecting the tote bags to be so large, and because the Center didn’t want to bend the bags, they needed to find boxes that were wide enough. This unfortunately meant the boxes were huge and also half empty since the tote bags were wide but flat. Also keep in mind this stack of boxes is almost my height (I’m 4’11” – 150 cm) So, what do you think? Did you get anything from Eevee-maggedon? What were you happiest with? What do you wish they had?