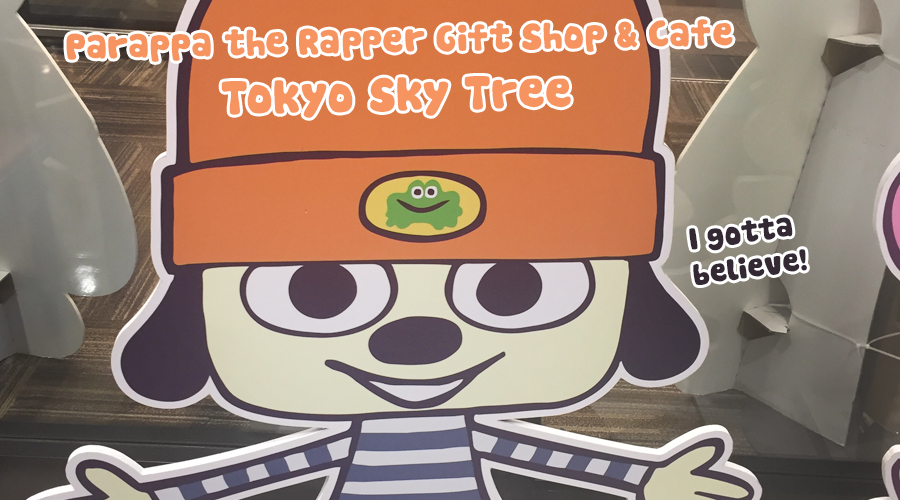 I (mistakenly) decided to stop by Tokyo Sky Tree on Friday to check out the Parappa the Rapper 20th Anniversary cafe. Although still in the middle of Golden Week, I went hoping that, being a weekday, it might be slightly less crazy than maybe over the weekend. I was wrong. It was maybe even more horrible than when I braved Sky Tree on a Sunday a few days earlier. Thankfully, the cafe itself was relatively not busy and I was able to get a seat after only waiting for a few minutes, so all hope was not lost. There is a general anime and character goods store located on the fourth floor of the Tokyo Sky Tree shopping mall (you don’t have to pay to get in) and the cafe is located just outside of this store. It’s pretty difficult to miss. The menu for the cafe seems fairly big at first glance. There are three savory foods: the Parappa sandwich set, Sunnie burger, and Chop Chop curry onigiri and onion soup set. There are also three different parfaits and a donut plate. Everything else is drinks! For every food or drink item you buy, you get a chance to reach into the box and pull out a little colored ball. There are four different colors you can get, and each color represents a different sticker. I ended up with two “Good” stickers and a “Bad”, but there is also “Awful” and “Great”. I ordered the sandwich set for food. The sandwich comes decorated with Parappa’s face and covered with his little hat. I got the Katy Blue Cream Soda.

The food itself was pretty standard for a themed cafe in Japan, but enjoyable! I have plans to go back and try the Sunnie burger and more drinks. Along with the cafe, there is a small gift shop as well, selling Parappa and 20th Anniversary merchandise. There is a variety of stuff, ranging from plush to clearfiles to snacks. There is even a cute gacha off to the side.

I am offering limited pick-ups for items from the Parappa store! You can find a list of items and prices in this post. Contact me through my contact form with a list of items you want and I will get back to you as soon as I can!

Thanks for looking and until next time ~